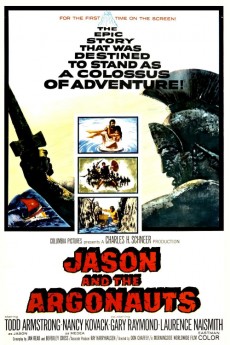 Honor Blackman, Nancy Kovack, Gary Raymond, John Crawford
An infant Jason is taken away far off safely after his family is killed and his father's throne taken by his uncle Pelias. Jason returns aft 20 years to claim his rightful throne. He saves Pelias from drowning unknown to him that he is the killer of his family and usurper of his throne. But Pelias recognizes him and cunningly encourages Jason to sail off to the end of the world to seek the legendary golden fleece n later reclaim the kingdom and face Pelias. Pelias gets relieved thinking that Jason wont be able to return safely. Jason is offered help by Zeus but he declines and sets out to build a ship and recruit the best men from all over Greece and among them is Hercules which boosts the morale of the crew.